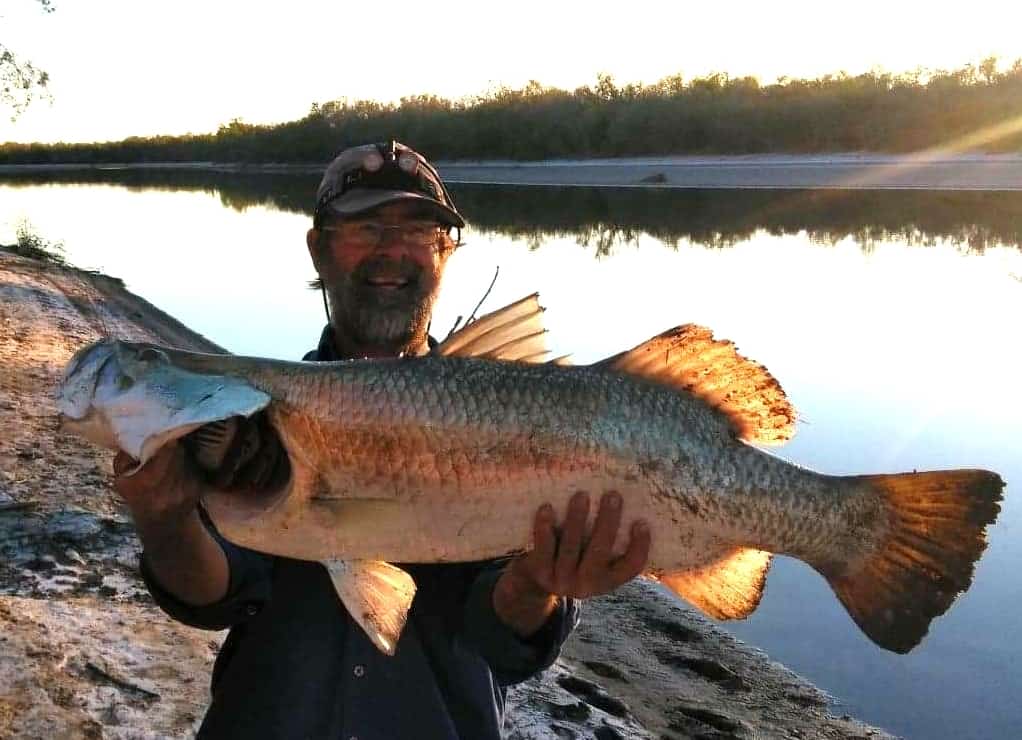 The poor wet season up north this year has resulted in silted up creeks, tides unable to make their way up the systems and hence the barramundi fishing was going to be tough. So it was with minimal expectations that Viv and I embarked on a short overnight trip into the Northern Territory. We basically used this trip as a reconnaissance, so I decided not to take the boat which turned out to be the right decision as the location we arrived at had a water depth of under a metre, with only a few isolated pools nearby. Our window of opportunity coincided with the full moon, also not ideal for nocturnal feeders like barramundi.

Regardless of the doom and gloom on the fishing side of things, camping anywhere is always exciting and especially so in the Kimberley. After dropping the truck tyre pressure for the bumpy road in, we loaded up the tray with firewood and a few hours later were setting up camp on the banks of the river with the double swag safely perched on the truck bed. I waited until about 4pm before starting a casting session that lasted well after the sunset. With no activity at all, once the moon has risen, it was time to start the fire, cook up a meal and crack a bottle of red.  Viv and I were chatting away and listening to the sounds of the river when a shotgun was fired on the water. Viv jumped out of her chair, but I assured her this was actually one of the loudest barra boofs I had ever heard. I raced down to the bank to cast the trusty halco popper, but after fifty casts this barra was not going to play the game, as it had likely already filled it’s belly after engorging the mullet.

Not wanting to miss the predawn session I awoke many times during the night to check the watch and so when the latest showed 430am, that was good enough for me to make a coffee and head up the river. I left a radio with Viv for when she awoke and scanned the river bank with a high beam head lamp to ensure there were no unwanted ‘visitors’ in the area. The river was pristine, but hardly any bait fish around and the birds had not yet commenced their morning ensembles. With a partial eclipse of the moon behind me, it was all a little eerie and after fifty or so casts there was not much to be excited about. However, just before the sun came up, the birds came down to the banks, stirring up the bait fish, while a lone osprey patrolled up and down the river looking for breakfast. This new activity prompted a more energetic approach to my popper casting and the occasional swirl near bait was the sign that the barra were indeed on the hunt. Instead of casting to the other side of the bank, I landed the popper just ten metres away, near the bait, after the first ‘bloop’ it was immediately boofed by a thumper and it was game on. Fighting against the rush of adrenaline meant playing the fish carefully in shallow water, retaining steady constant pressure on the line, especially during the three sets of acrobatics and resisting the temptation not to edge closer to the bank where the mud was like quicksand. With my heart racing, a beautiful 95cm yellow finned saltwater barramundi was safely landed, my biggest ever from the shore and the trip was now complete.