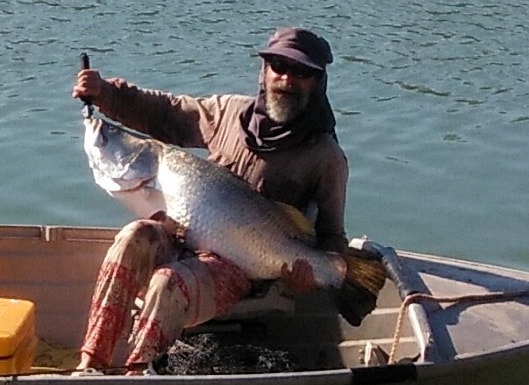 The surface of the river erupted, adrenalin kicked in and I immediately knew this what I had been dreaming about.

The planning began with Jungle and Duths a year ago, hoping to spend five days on the river chasing barramundi. Some decent rain was much needed up north to flush the rivers out, so when a serious low system sat around Kununurra for three days, dumping over 180mm in February, we were excited. Next we required neap tides that coincided with a new moon, as barra can be finicky with too much light around. To further maximise the fish being active, we had to be as late in the season as possible, with temperatures in the mid 30’s or better. The first setback was Jungle announcing he was due to have heart surgery, so would have to pull out. He is now firmly on the pathway back to fishing heaven. Second setback was the COVID dramas when regions closed down, but WA has so far pulled through with flying colours and the Kimberley reopened on June 18.

In the weeks leading up, temperatures were unusually low, not a good omen, but then the fishing gods turned on a burst of 37-39 degrees the week before the trip. Duths and Bella dragged their caravan to Spot X while Viv and I camped up in the swag on the truck. Perfect really, as Duths had the mod cons while we ran an Engels off the spare battery on solar with an esky full of block ice to keep the ‘soft drinks’ cold! With the camp set up in less than two hours, Duths 3.7m tinny was on the water in no time. The first afternoon of trolling lures produced six nice barra up to 60cm, a great start to the trip. Over the next four days we landed over 60 fish and for a long time Bella held the record at 67cm. I was having some hot sessions on the poppers, landing six right in front of our camp. Nothing more exciting than waking at 430am, casting across a pristine river, birds awakening and occasionally watching the sea mist waft in. The bigger fish were definitely elusive, teasing us even, as on two occasions we spotted metre plus fish leaping out of the water. On the final morning I hooked a horse on the popper, the fish stayed deep, headed immediately across the river, only for the hooks to pull. I was gutted, after four days of relentless casting, every morning and night, with an aching shoulder to remind me. As Duths awoke, we headed out for one last session, again landing half a dozen fish which were all returned. Then, as we were almost at camp, I landed a better fish at 62cm. As Duths turned for home, I couldn’t help but live up to my nickname, Mr One More. So he turned for one more run and I asked him to go another twenty metres to ensure the lures hit the hot spot. No sooner had he turned and the surface of the river erupted, adrenalin kicked in and I immediately knew this what I had been dreaming about. For the next ten minutes or so the fish of my life tried four times to dislodge those small trebles on the Gold Bomber with acrobatics, each time my heart in my mouth. When finally landed, measuring in at 1.04metres, we of course hooted and hollered. Being so close to camp, the girls were able to snap some quick photos and then this beautiful fish was safely released back into the river.

Just did a refresher course with Wayne and really had a great time. He brought back so many things I had forgotten and taught me a lot of new boating skills. This guy really knows his stuff, so is you haven’t got a skippers ticket or need to know about boats, contact him, you’ll be glad you did.