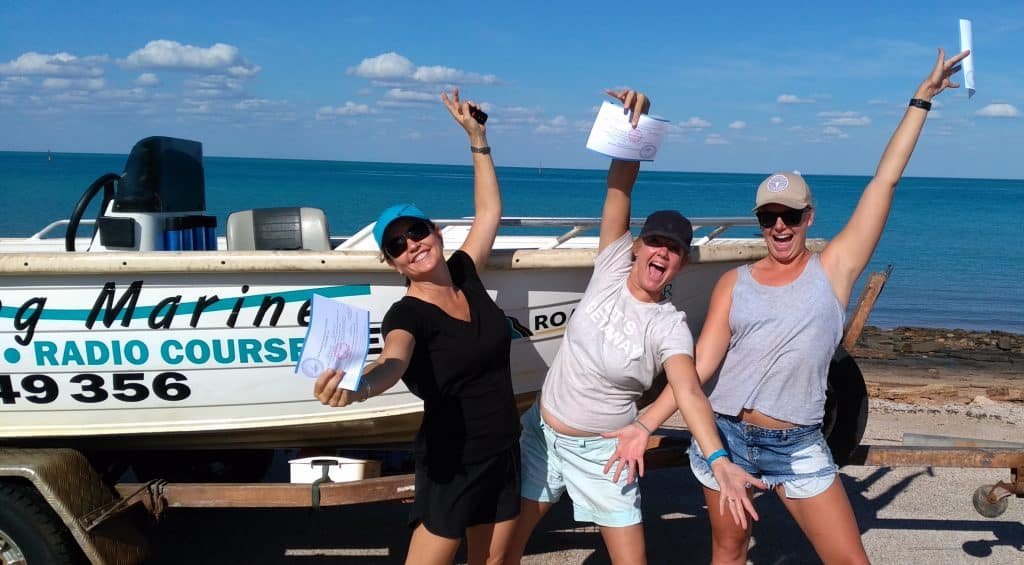 In previous articles I mentioned the amazing number of boating businesses operating out of Broome, especially at this time of year when the town is at peak capacity. My last skipper’s course in Broome was for two owners of the most prestigious and world renowned touring vessels in this area, True North and Great Escape. Hollie Tharp and Kylie Bartle joined up with long time family friend, Clauda Berson, who was prac teaching up here at the time, for a memorable girls only course. I thought I had some energy, but Kylie was soon nicknamed ‘turbo’ as she laughed and joked, but also constantly quizzed me about rules and regulations. As one would expect, their practical skills were right up there and a great day was had by all. ( refer attached photo ). A tour on one of these vessels has been on my bucket list for years and while they might be expensive, I have never met anyone who did not say it was not well worth the cost.

One of the major developments up here is the establishment of an LNG floating offshore gas facility in the Browse basin about 200km from Broome. Conservationists will remember the extensive and prolonged protests in this region when the original plan was to build a land based operation at James Price Point, north of Broome. Having camped at this location on a few occasions, it is easy to see why the area was considered inappropriate by many, due to it’s spectacular pristine coastline and amazing marine life. Whether this plan was shelved due to the strength and validity of these protests, we may never know, but it appears offshore processing is now much cheaper, but hopefully also less environmentally sensitive. Now I have seen some very large vessels while working out of Port Hedland, some over 200 metres long, but when reading about the floating LNG facility that recently left South Korea on it’s way to Broome, these paled into significance. At 488 metres long, this is the world’s biggest ever vessel and will take a month to reach it’s final destination, where massive moorings have been installed, awaiting to be connected. Another smaller vessel at 386metres is also due to depart later in the year, although avoiding the cyclone season is the primary concern for vessels this size. If you go onto the free vessel finder website and search for Ichthys Explorer, you can track the journey yourself as four tugboats lead the way.

To answer last week’s question, Lisa Blair was attempting to become the first woman to circumnavigate Antarctica, solo, unassisted and single handedly when she was demasted in seven metre seas a few months ago. You have to admire her resilience at making her way to Cape Town under motor and jury rig, coordinating repairs and now continuing to complete the voyage. This week’s question is, “Who was the famous WA sailor who was the first person to circumnavigate Antarctica?