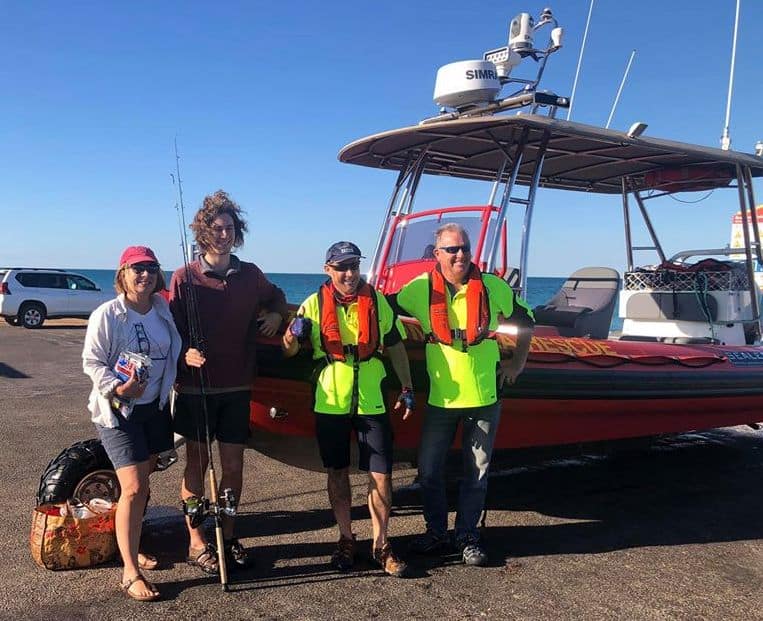 When looking after the boating community, marine rescue groups deal with a wide range of incidents and I was given a first hand account of a recent one in Broome that is worth retelling. Our good Gracetown friends, Robin and Ian Moustaka, had called in to see us at Karratha on their way to Broome to pick up their son Scotty a month or so ago. Robin is one seriously keen fisher woman, was brought up fishing with her father in the United States and over the time we have known each other, have fished together out of Gracetown and even on the Whitsunday Islands. Robin will fish anywhere, catch anything and eat almost anything that comes out of the water, as long as it will not kill her.

Therefore, it was only natural that Robin would put in a spot of fishing with her son Scotty while they were in Broome. On this particular day, Ian did not join them as he was on a morning bike ride. So before we take the story any further, let’s have a chat about tides and the Rule of Twelfths! This rule dictates that over an approximate 6 hr tidal period, in the first hour 1/12th of the tide will shift, in the second hour 2/12ths, third hour 3/12ths, fourth hour another 3/12ths, fifth hour back to 2/12ths and final hour 1/12. So you see that in the middle two hours of the tidal range, 6/12ths, half of the whole tide, rises or falls. Add this to a full moon cycle when the tides are bigger and then add again a location like Broome, where on this particular day the tidal range was over nine metres, then you get the picture. There was going to be over 4.5 metres of tidal movement in just a two hour period.

So it was with none of this in mind that Robin and Scotty headed out to a scenic rocky outcrop off Entrance Point. One can picture Robin’s sole focus being looking out to sea, baiting hooks and intensely seeking out the next big catch. When Scotty asked the question about which way the tide was moving, Robin dismissed it quickly, assuring Scotty is was running out. Alas, not so long after, perhaps only an hour or so, they decided to look back, only to realise they were now stranded on an island. Robin then took some affirmative action, which she is quite good at really and decided to ring the Broome Marine Rescue Group, initially for a tide update. When they advised that there was still another two metres of tide to come in, Robin and Scotty did not want to become stars in the next Castaway movie and realised that they needed help. So Broome Sea Rescue put their rescue vessel, Ibis, to sea which is one of the ‘Sea Legs’ that comes complete with hydraulic wheels attached to the vessel, basically an amphibious craft, very popular in Broome. Robin and Scotty were soon safe on land and in her usual positive manner, Robin grasped the photo opportunity ( see attached ) and viewed the whole trip up north as 10 fishing days out of 25 plus 1 free boat ride. Good ending, well done Broome Sea Rescue and watch those north west tides eh!