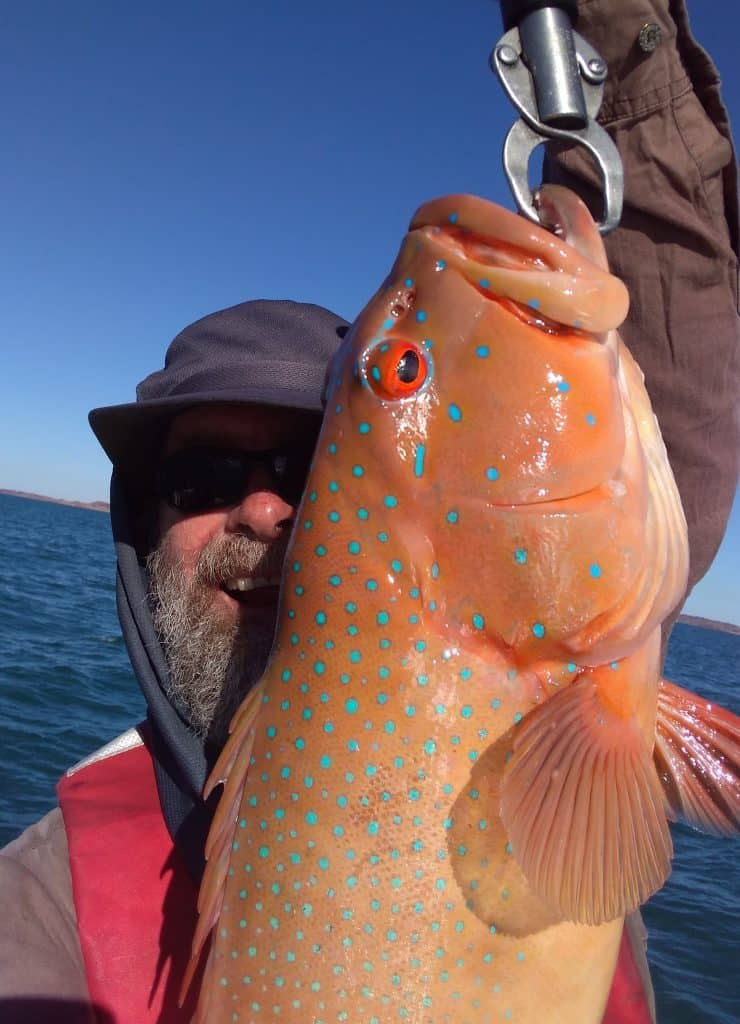 Sea Soaring Marine managed to get a work pass for inter region travel before the Pilbara was reopened and it was quite eerie with none of the usual caravan traffic. We have been in Karratha for a month or so now, but only got a chance to do some fishing yesterday, so here is the yarn.

With no fishing spots out from Dampier, it was always going to be a speculation trip for me, so I was prepared to put it down to reconnaissance. I had managed to extract tit bits of info from a few locals, one being that the hot bait was green king prawns, not the cooked ones I use in Broome and then there was a vague description about a rock wall, around an island, near the salt mine that was worth a troll with lures on bigger tides. The other useful information came to mind when I saw a guy launch his 4.2m vessel. I had seen him recover numerous times while I was running courses and on occasions overheard him talk about catching coral trout and cod. Given his boat was only 4.2m, I assumed he was fishing reasonably close in and when I headed out and saw him alongside a channel marker, only three kilometres out, it reminded me of a similar tactic I employed at Port Hedland years ago. Unfortunately, on that occasion I was monstered by sharks, lost six rigs and never landed a fish. So, what the heck, I went out another few kilometres to an outer channel marker and on interrogation of the 18metre depth, the Furuno sounder lit up like a Christmas tree. With the tide running and needing to be on the outside of the channel marker for safety reasons, I was always going to have to drive and fish at the same time, especially as I have yet to bite the bullet and invest in a Minn Kota electric motor. First drop produced a small Spanish Flag which I reeled in vigorously, worried about the shark factor. Next drop and my shark phobia kicked in again when the line peeled off, but I soon realised I was making ground and when a beautiful 4kg bluebone was landed, even though no-one was within miles, I hooted loud. Second drop was another good hook up, but it took me to the marker buoy and I lost a rig. Now I was really amped and desperate to land fish before the sharks moved in. Next drop, big hook up almost lost to the marker again, but I went hard and landed a 5kg Coral Trout and they could hear me hooting back in town after that one. When the next drop resulted in a good size cod, it was time to mark the spot and leave it alone for another day. Sensational and all in less than thirty minutes of fishing. With the tide now up a bit, I decided to look for the rock bar near the salt mine and after negotiating a few islands and shallow bars, found what I was looking for. Twenty minutes of trolling a 3m spearhead on the barra rod produced nothing, but a change to a 4m barra classic brought an immediate response with a solid hook up. The fish took me to the rocks, but after some patience I managed to extract a nice black spotted rock cod which finished off a magic day!