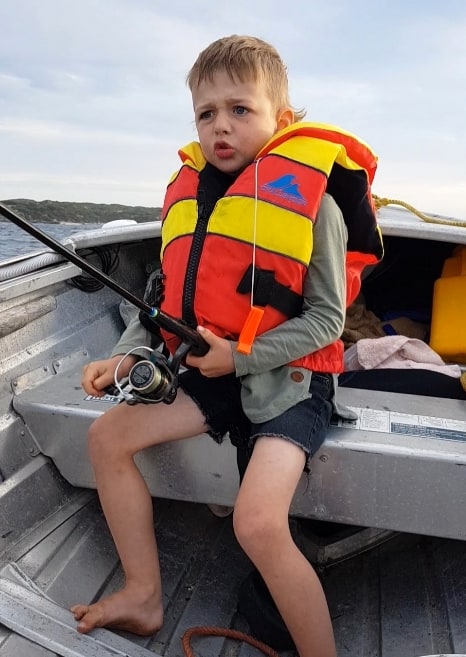 Before you assume I am going to direct you to some miracle maritime motivational online talk fest, take a deep breath, read the article and you will soon see how this title came to be.

Firstly, think back to your very early fishing days and recall the overwhelming joy of catching that first fish and then the intensity that surrounded your keenness to repeat that feeling. No matter what time of day, whatever else was going on in your world, you just had to go fishing again and again and again. Well that’s exactly how it has been for a 5 year old youngster in Gracetown, Ted Pritchard, son of good friends Ian and Michelle. Ted has been recently introduced to boat fishing and by the look on his face in this photo, he takes it very seriously. Great to see the lifejacket on too, Ted. Those in the district who have met Ted will agree that although he is 5 years in age, it all stops there. Ted is going on 15 in the energy stakes, perhaps even 50 with his thoughtful opinions on almost any topic. To give a brief insight, Michelle and Ian’s neighbours, the Berson family, one day took the family marroning. At the end of the session they had caught five good sized marron. Ted was sporting a concerned look on the trip home, just as many a serious fisho has in the past, contemplating how to divvy up the catch, with only five marron, but two families. You see Ted had worked out long ago that five into two did not go evenly and so bravely raised the question for discussion. The ensuing debate was apparently forthright but quite polite as Ted stoutly defended his familys’ case for three marron as opposed to the Berson family. Anyway, back to the main thrust of this article. So what would a spirited young Ted, who is determined to go fishing, decide to do when Dad says he is not taking him because he is too busy? With Michelle tending to the new born and Ian blissfully assisting with domestic duties in the kitchen, Ted chooses his moment to perfection. He jumps on his bike and against all previous parental  guidance, heads off into the sunset, leaving home with attitude. Now naturally he would want to enjoy the trip, so he casually drops into the North Point carpark on the way, where he meets a few locals who know Ted only too well. They are somewhat surprised to see him out and about on his own, but when questioned, with all the confidence of a seasoned Cape to Cape bike rider, Ted announces he is leaving home to live in Cowaramup because his dad won’t take him fishing- priceless. By this stage Michelle has returned to the kitchen and checks with Ian as to Teds’ whereabouts, whereupon the search begins. Fortunately Ted has not yet left the North Point carpark, is safely recovered and a Ted Talk about the dangers of his actions soon follows. So the next time your kid asks you do go fishing, think twice before you answer.